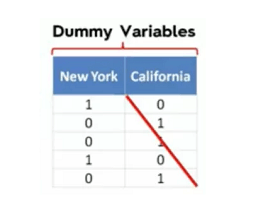 Multiple Linear Regression used in machine learning processes can be best explained by taking an example of a business problem.
Business problem – A funding company needs to analyze 50 companies with various factors like R&D, expense on marketing, profits, etc to check which companies suit them to invest in. This company basically needs to analyze the performance of 50 sample companies that are already in existence in different markets and see which type of companies suit them the best. They want to check the factors like R&D, market, etc to understand how much of these factors impact the profits of any company. Obviously, their main criteria of investment is the profit earned by a company. Apart from this, they are not looking to invest in the 50 sample companies given in the dataset. They want to create a model which can help them analyze various criteria for the performance of companies.

Based on our machine learning model, this funding company will set up guidelines, that this type of companies are good for them to invest.

Converting the above variables to the equation of multilinear regression, we have :
Profit(y) = R&D(m1*x1) + Admin(m2*x2) + Marketing (m3 * x3) + State(state contains text which makes it a categorical variable)
To proceed with mathematical calculations for this dataset, we need to convert the variable state into its corresponding categorical dummy variables.
Let’s say, state = New York, California. So, the new dummy variables are New York, California
Therefore, our linear equation changes to:
Profit(y) = R&D(m1*x1) + Admin(m2*x2) + Marketing (m3 * x3) + New York(m4 * D1[summy variable new york]) + c(now c will automatically take the value of california)

P-value is a value set by a data scientist according to his domain knowledge or measures. Let’s say this value is set to 5% or 0.05. Once the model is created and the model predicts the data, P-value is used to decide the reliability of this data. Let’s say you have assumed the data to be 90% correct and have set the p-value for this to be 0.05. This means, on performing calculations of p-value as coming from the predicted data(output), if the p-value is equal to or less than the pre-defined value, the model is fine and can be treated as reliable. However, if these values are greater than the pre-defined p-value, it doesn’t really means that the model is incorrect. It just means that your environment is not exactly the same as the environment used while creating the model,
For example – we can say that the data used to analyze this model was not sufficient. This means that the model needs more analysis, but doesn’t necessarily means that the model created meaningless results.

1. All IN
2. BACKWARD ELIMINATION
3. FORWARD SELECTION
4. BIDIRECTIONAL ELIMINATION
5. SCORE COMPARISION
Type 2, 3 and 4 are also referred to as Stepwise Regression.

Spread the word :)
Filed Under: Machine Learning, The Tech Stuff
Automation everywhere! Even for cash-backs?
How to import Facebook friends’ birthdays as a calendar file